skip to main | skip to sidebar

An Overall Perspective on Education

Posted by ConceptCreature at 7:56 AM No comments:

With Disney owning Star Wars, and new Star Wars movies being made, I felt it was finally time to do a Star Wars Mash-Up!  So here it is: Darth Jafar!  Kinda amazing how many of his features matched so well with Darth Vader's helmet! 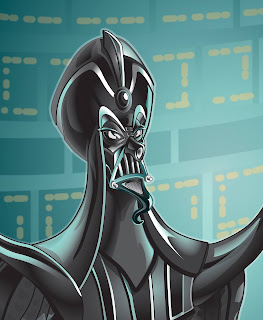 Posted by ConceptCreature at 8:27 PM No comments:

Had a friendly challenge in a drawing group to do a Luchador painting. Which I forgot 'til the night of the deadline of the challenge. So this is what I pulled off in a handful of hours. 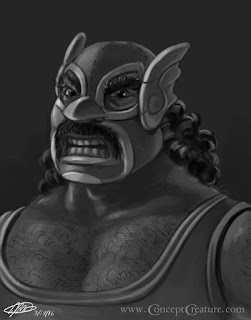 Posted by ConceptCreature at 11:06 PM No comments:

So I've decided to make a massive redesign concept for every Power Ranger. I started many moons ago with a Yellow Power Ranger for a work's weekly design challenge, but since then I kept revisiting old concepts for other rangers that were left on the cutting room floor, I thought, "Why NOT draw them all out?"
So here's my final illustration for the Pink Power Ranger. Enjoy! 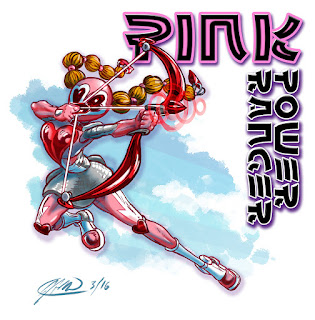 And of course don't forget to check out my normal portfolio at www.ConceptCreature.com.  Thanks!

Posted by ConceptCreature at 12:29 AM No comments:

Part of researching animals is finding out things. I found out they're NOT called "Bugged-Eyed Goldfish", but Black Moors.  There ya go! :) 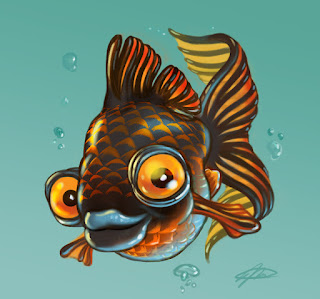 Wouldn't mind making this lil' fella into a game, one day!

Posted by ConceptCreature at 11:59 AM No comments:

After an exhausting few months, I've finally done some flagrantly self-indulgent artwork of a Eurasian Red Squirrel.  I'll have numerous new projects I'll be able to show off within the next few months, so stay patient, as I've got some stuff I'm REALLY proud of!  Until then, also go to my website, www.ConceptCreature.com, for occasional new art. (also expect a NEW, IMPROVED website sometime within this coming year!) 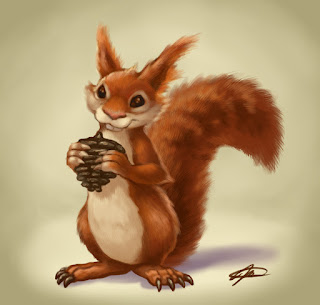 Posted by ConceptCreature at 5:51 PM No comments:

I Have Some Of The Most Interesting Friends

I must say, I have some pretty interesting people that I call friends. Some are cops, while others used to be crooks. Some have been insanely successful, and others I'm absolutely baffled that they aren't famous or rich. There's nurses and teachers, cops and military, all honorable professions that must have a calling in your soul the likes that I can't even conceive. Some are raging liberals, while others are staunch conservatives. Regardless our political ideologies, we're able to discuss our differences civilly and with respect, 'cause that's what friends do. I know people that have toured Alaska, live in Europe, worked in Antarctica, and are diplomats and humanitarians that traveled to places I wouldn't DARE step foot on. And that's not even including the friends that have stayed in the same place they were born, and can't imagine living anywhere else.
Ex-junkees, prior alcoholics, current winos and productive stoners are also within my friendly repertoire, and if you think that's a bad thing, let me just insist you get the best stories from all of them. I got a surprising amount that continue to play with puppets, jump around in cartoon costumes, dance to songs, even juggle, and those seem to be the happiest and most satisfied of all my friends.
A lot of them are creative, like me. They've made your kids laugh at movies you've all watched a million times. They've created cartoons that have been on your television for over a generation. They've won Oscars and Caldecotts; Addies and Little League Trophies. They make their own beer, sell their own crafts, bake their own cakes, write their own scripts, shoot their own films. A handful of them can't catch a break, no matter how hard they try, while others seem to live the most charmed lives in the world, with opportunities almost seeming to be wisped down to them, with barely an effort involved in earning them. Regardless what spectrum you fall under, I root for you both, and cheer you on with every endeavor.
Some have reproduced like rabbits, and it's crazy to see these cute little clones of my friends crawl and scream and run and quickly grow up into being their own people. Some haven't had kids at all, and although there is a small part of me that envies your copious amounts of spare time and money, I do kinda muse at the lack of a pretty damn interesting part of your life that you've more than likely chosen to not engage in.
Devout Atheists, stringent Catholics. Modern Muslims, transcendental Buddhists. Most don't really seem to have a strong opinion, one way or another. I still keep in contact with my very first best friend from Kindergarten, and continue to hang often with old co-workers-turned-best-friends on a weekly basis. I've noticed that true friends have a magical way of picking up with you right where you left off. It's a strange alchemy that makes time and space irrelevant, and you act like you just saw them yesterday, even if it's been a decade.


You all are insanely interesting, and make my life so much richer by being within it. There has been so much laughter during the good times, and thousands of words of support during the bad times. Life would be so much more boring without you, and there's so much that all of you have contributed to me that has helped make me more interesting to the rest of the world.  I thank you for the spice and flavor that you add to it all, it's truly an honor to be part of this bunch!
Posted by ConceptCreature at 10:29 PM No comments:

ConceptCreature
I'm a commercial artist that specializes in animation, fantasy, sci-fi, and concept art. Check out my Concept-a-Day page to see something new and fresh!